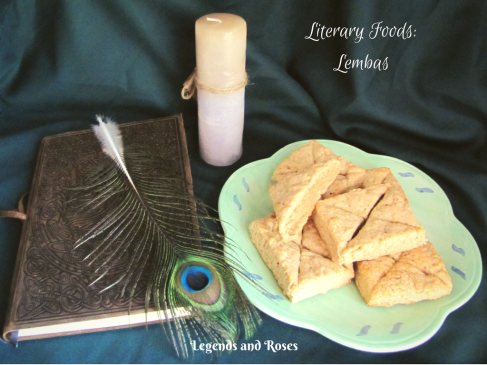 “In the morning, as they were beginning to pack their slender goods, Elves that could speak their tongue came to them and brought them many gifts of food and clothing for the journey. The food was mostly in the form of very thin cakes, made of a meal that was baked a light brown on the outside, and inside was the colour of cream. Gimli took up one of the cakes and looked at it with a doubtful eye.
“Cram,” he said under his breath, as he broke off a crisp corner and nibbled it. His expression quickly changed, and he ate all the rest of the cake with relish.
“No more, no more!” cried the Elves, laughing. “You have eaten enough already for a long days march.”
“I though it was a kind of cram, such as the Dale-men make for journeys in the wild,” said the Dwarf.
“So it is,” they answered, “But we call it lembas or waybread….”
The Fellowship of the Ring, Book II

So, yes, I am unabashed and unashamed Tolkienite/Ringer? 🙂 (Waves to new friends out there.) And one of my very favorite things to do, is try out literary or historic recipes. I am hoping to make this little series a regular feature on the blog. I picked today to share this excellent recipe, because if you have read the books, you know that today is Bilbo and Frodo’s birthday!

When I first read the Lord of the Rings and came across this little bit about lembas, I immediately thought of hardtack, the infamous biscuit that pioneers and mountain men would take on the trails and deep into the woods with them on their journeys. I wonder if that is what Tolkien had in mind? Maybe we could put hardtack, ship’s biscuit and cram all in the same category, but lembas seems to be a class unto itself. Lembas has also always made me think of shortbread. Though I am sure something like that would be much too crumbly to take on a long journey. When I went to search for a recipe for lembas online, I came across so many it was hard to decide which one to try! Everyone has there own spin on what lembas is and how it should look. I guess we humans will have to guess until we can find an elf to teach us how to make it properly. 🙂 I wanted to try the recipe that they used for the movies, but the actors said it was hard and dry and hardly edible! Movie magic indeed!

So I settled on this recipe here with a few personal changes. I added some more cinnamon and mace (like nutmeg) and a splash of orange flower water. It came out as a crumbly dough for me so I ended up adding about 1/4 cup more cream. Enjoy!

(Also, if you are interested in more Middle earth inspired cooking check out this amazing cookbook I found! 😉 An Unexpected Cookbook)